“The industry of fabric is older than pottery or metallurgy and perhaps even than agriculture and stock-breeding. Cloth is the original technology.”

So writes Kassia St. Clair in the introduction to her 2018 book The Golden Thread, How Fabric Changed History*.

It’s a pithy statement, yet with it she hints at a thesis that the book amply — and entertainingly — defends throughout: that cloth has always been a part of civilization (and pre-civilization) and that its significance has largely been overlooked by being everywhere and ordinary all the time.

The Golden Thread isn’t simply an account of textiles in ancient history, nor even of the technical advances in fiber use or weaving, though the book seamlessly includes both.

For example, there are tales of simple and everyday cloth and ones where fabric is extraordinary, beautiful, inspiring, and even luxurious. St. Clair looks at garments, rugs, furnishings, and objects created with fabric detailing how it takes a massive output to create even the smallest thing.

And yes, some things really are made from golden threads, like this 1960s Egyptian silk and 14k gold shawl from my private collection:

The Golden Thread is so all-encompassing, from the breadth of its research to the playful inclusion of literary and legendary figures, from the examples of historic people and events to the complex exploration of societal issues, along with contemporary trivia and novelties, that you could emerge from reading it a primed would-be Jeopardy show champ.

And the biggest takeaway of all? That the sheer scale it takes fabric in raw materials, labor power, and time to grow, harvest, design, create, and trade and distribute it, makes cloth the single most resource- and labor-intensive human industry ever. Her thoroughly researched stories of Egyptian linen, Chinese silk, and Indian and American cotton bring home this point unmistakably. More ominously, her look at the link between synthetics and fast fashion offers a cautionary tale.

Making clear that from humble peasants’ unisex shifts to the elaborate silk brocades of royalty, no amount of turning crops into clothes or wares has ever been truly fast or easy business, until it becomes…fast and easy business. 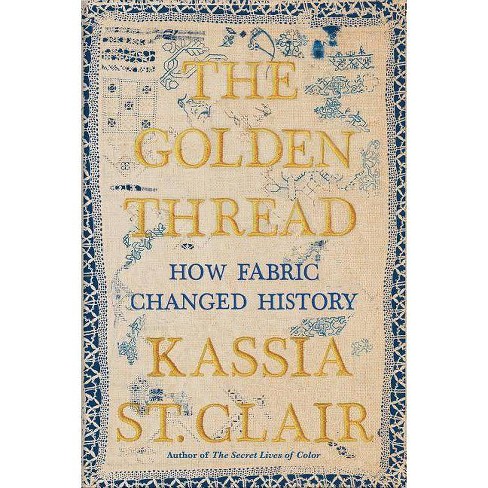 So do you, like me, have to be a great lover of fiber, textiles, fabric, fashion, and interior design to get hooked by the stories St. Clair weaves together to build the tapestry of this book?

If you’ve got a hungry brain and a penchant for history, society, culture, and politics you’re going to be utterly fascinated by the tech innovations of fiber over time and in different places. As a bonus you’ll be wowed by St. Clair’s style in presenting the 13 episodes in cloth history that she’s chosen as stand-ins for the whole arc. Long story short, she’s a masterful, totally engaging, and award-winning storyteller.

In the preface to the book she writes,

We live surrounded by cloth. We are swaddled in it at birth and shrouds are drawn over our faces in death. We sleep enclosed by layer upon layer of it — like the pea that woke the princess in the fairy tale — and, when we wake, we clothe ourselves in yet more of it to face the world and let it know who we shall be that day. When we speak we use words, phrases, and metaphors in which the production of thread and cloth have insinuated themselves. The words ‘line,’ ‘lining,’ ‘lingerie,’ and ‘linoleum,’ for example, are all rooted in the word ‘linen.’ For most people who know little of the practical business of turning stems of flax into thread or conjuring damasks from a skeletal warp on a loom, these linguistic motifs could seem little more than empty shells washed up on a beach: a pallid reminder of something greater, richer, only half understood today, but worth our curiosity.”

This is another hint at St. Clair’s research genius, and her storytelling gift.

St. Clair lures us back in time with an ancient Chinese legend associated with silk, teases out the hidden tensions surrounding wool in the legend of Robin Hood and his contemporary Richard the Lionheart, mines the many ads for runaway slaves that described the clothes on their backs in great detail, and peeks in on the collaborative style of mid century seamstresses making spacesuits for the egghead NASA engineers that hired them. Building layer upon layer of a chosen vignette, a much larger picture emerges of that fiber, or cloth, or technology. At once she tells a sweeping story of the time and place of the society or event in question while retaining the significance of the individual whose event stands in for the whole.

She’s a holographic writer in that regard. And a holistic one.

Fraying at the Edges

Yet just because this book is an easy reading lark with a writer who enjoys her subject matter immensely, make no mistake that it lacks a viewpoint, analysis, or critique.

In the chapter on synthetic fibers, for example, St. Clair examines the troubling advent of rayon, detailing horrifying consequences for the health of early rayon workers with a mini-treatise on the conditions of 20th century forced laborers.

Already a questionable substance at the manufacturing level, rayon (and other synthetic fibers) have had a disastrous impact on worldwide human and ecological health well beyond that of its workers.

Rayon, with its toxic effluence, killed off many a river. And synthetic fibers in general paved the way for cheap fast fashion, an industry in which rich nations and all our citizens “enjoy” wage slaves who we’re utterly indifferent to not only in the day-to-day, but also when they face wretched work conditions and even dismemberment or death — it’s not like we stop buying the stuff at breakneck speed.

Add to this the astronomical volumes of scarcely used and rapidly tossed synthetic clothing and we’ve got another environmental catastrophe building up around us Idiocracy style.

St. Clair concludes this compelling chapter arguing that the situation, while grave, is not the fault of industry alone. Revisiting Agnès Humbert, an art historian and World War II-era forced rayon factory worker whose story St. Clair told at the start of the chapter she writes,

Perhaps the biggest change, however, needs to come from those of us doing the buying. It is unlikely that we would ever find ourselves, as Agnès did, working at one of these factories. But perhaps this is a possibility that we should give a little more thought to, each time we go shopping.”

Similarly, in detailing the fabrics critical to extreme environments — the Antarctic, airless mountain peaks, and deep space — St. Clair admires the chutzpah that gets people to try to clothe ourselves for hostile landscapes. Yet in detailing the foibles associated with these aims she suggests it’s sometimes just a vanity project.

Should we, she asks by implication, try to conquer a place just because, as George Leigh Mallory said about climbing Everest in the 1920s, he did it “because it was there?”

In a fascinating chapter on what it took to outfit the original astronauts for a trip to the moon a host of absurdities emerge. St. Clair offers a sympathetic accounting of their motivations, innovations, trials and errors, and ultimately, successes in making space suits. Yet behind it all issues of cost, rationales, ego, and blind spots remain, as do the awesome natural — biological — conditions needed for human life. She writes,

The most salutary lesson is that of Soyez 11, a Russian craft so small that spacesuits were ruled out for the three-man crew. On its return to Earth on June 30, 1971, a valve failed, causing the cabin to depressurize rapidly. Autopsies on their bodies, recovered from the capsule when it touched down, found that they had all suffered brain hemorrhages. Their blood contained ten times the usual amount of lactic acid, a chemical released when humans are frightened. They had died, terrified, in full knowledge of one incontrovertible fact: human bodies are not suited to space.”

That St. Clair can both marvel at what people make with fabric, even when absurd, and tell their stories fully and fairly, is a testament to her brilliant mind, journalistic integrity, and storytelling chops. Add to this that she also offers incisive commentary through the story at hand itself and I believe we’re looking at a true intellectual giant here.

I’m not sure I’ve yet read an author who so effortlessly knits together so many bits of ordinary human life, with something so humble and yet so essential to people as cloth, as does St. Clair.

The Golden Thread reaches deeply into the tensions built into every advance in textiles. It entertains the reader and subtly provokes our minds to question the whiz-bang of human innovation against the all too often obscured story of human costs.

Each story St. Clair shares is bolstered by a rich inclusion of ordinary people and places, detours into linguistic echoes, and unearthing the myths and legends that surround us all the time. In this she re-enchants the world we live in beyond the immediate lesson on fibers and imbues human efforts, in this case around cloth, with a measure of mystery and pathos.

This book will long remain one of my all-time favorite reads.

If you’re into textiles this is a must read for the joy and wonder of how critical to human life they are.

But the book is far from the stuff of fluff. It’s for any serious person in search of the bigger story of human history and how it can be found in such an ordinary thing that it’s mostly been overlooked, just as we might overlook a painstakingly and time-consumingly handwoven dishcloth once it got a little grubby doing its actual duty.

*DISCLOSURE:  The above link and this link to The Golden Thread: How Fabric Changed History goes to my Amazon affiliate account. If you purchase the book through this link I will get some extremely small dribble of money from the link.

One of our #duralee #pheasant (non-medical) fabric