You are here: Home / Fabric / The Wonderful World of Vintage Linen Decorator Fabrics 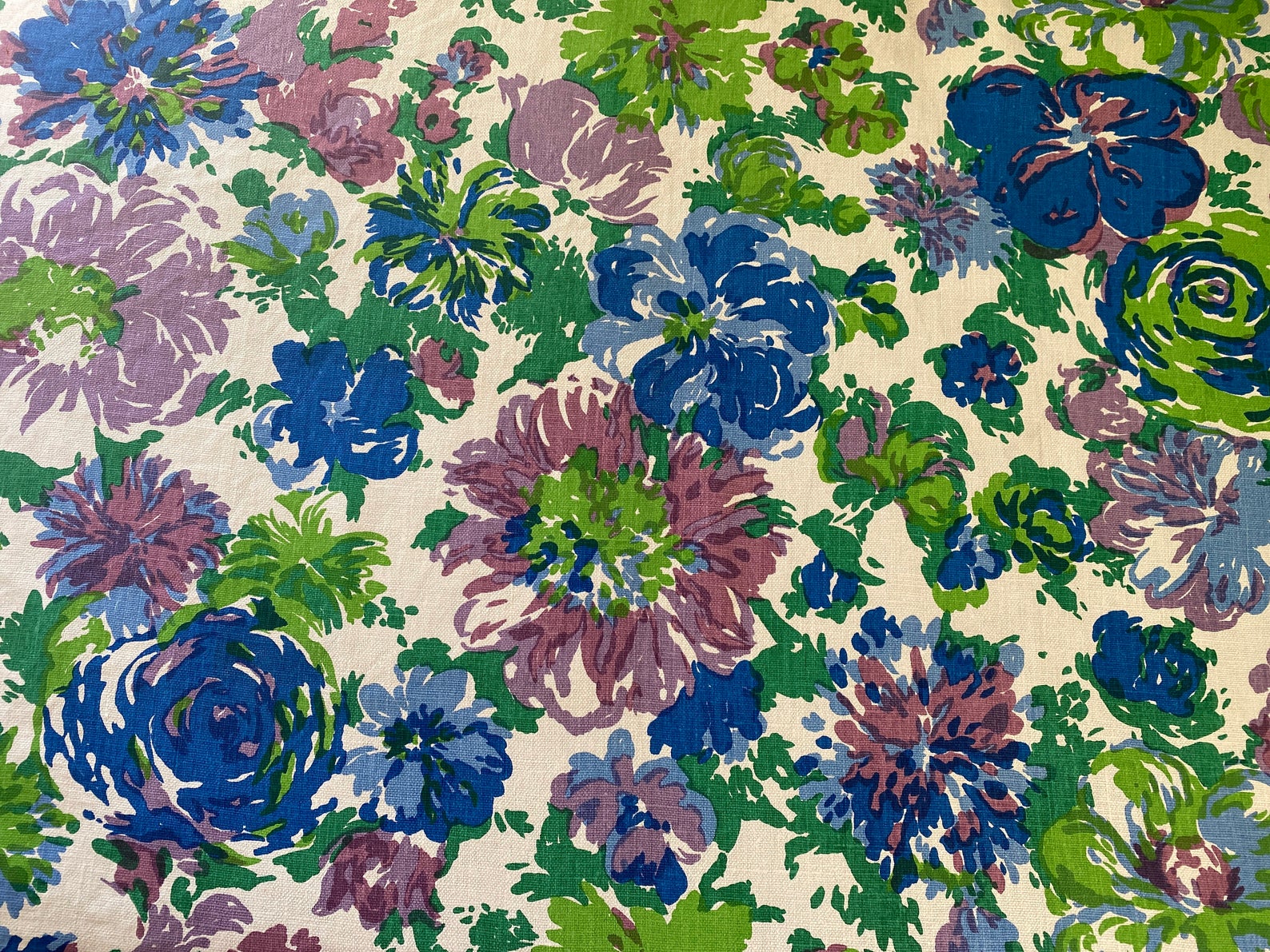 I often claim to be a minimalist. Though, if you saw my office right now, laden down as it is with soooo much fabric that hasn’t yet been processed, you wouldn’t believe me.

But when it comes to my home decorating style — a grandmillennial take on traditional (even though I’m actually not actually a Millennial but Gen X) — I actually keep it uncluttered. It’s not that I’m all streamlined and Mod. Far from it. It’s just that I can only take so much stuff before I’m overwhelmed so I readily pass on adding new things to my place.

Where I get my material girl pleasure, then, is in sourcing and curating for others. That way I get an amazing piece of fabric in my hands for a while, but just a while. I get the satisfaction of looking at it and admiring it and even loving it. And then I get to let that beautiful fabric go, passing it into the hands of my dear customers.

I have so much passion for vintage fabrics and textiles that I really can’t resist sourcing for the shop almost continuously. Many of my finds lead to compelling research projects that unearth all kinds of knowledge about what was made, who made it, what was happening in that design era, how it was used, and more. And, of course, I’m always imagining how those looks can be rediscovered for today’s unique home decor or sewing project.

So today I thought I’d share one of my real heart-thumping fabric loves — vintage decorator linen.

The kind of linen I typically go ga-ga over is often printed in bold colors and designs. Perhaps there’s something unique about the flax fiber that it holds color so well, so deeply, so vibrantly. I find this kind of saturate color impact on vintage decorator linen pieces again and again.

And then there’s an intangible element that I guess is kind of “woo woo” in my mind. Perhaps it’s linen’s longstanding place in human culture, its central role in the textiles of Egypt and other ancient lands. Maybe some trans-generational memory insinuates itself into us when it comes to the fiber, the weave, the feel, the hand of linen. Something epigenetic, dimly recalled from a past life, or just deja vu-ish.

Or at least it feels that way to me.

As humble as linen is, there’s something royal about it at the same time. Its fibers glisten, almost always leaving a natural sheen that is seldom lost even when it’s dyed or printed. It shines from within, as many natural fibers do, with a kind of internal light. I can’t take my gaze away, and to touch a piece of fine linen is always a tactile treat.

What’s All the Buzz about Grandmillennial Style?

It’s sweeping the decorating world with a new take on classic looks. Learn why younger people are so into their grandmothers’ sofas, throw pillows and drapes with our 8-page illustrated Guide to Grandmillennial Style. Get your free copy now.

In Kassia St. Clair’s book The Golden Thread: How Fabric Changed History, she writes of linen that,

While other kinds of textiles have been found in ancient Egypt contexts, they were clearly in the oppressed minority. Of the several thousand fragments recovered from the Workman’s Village, an archeological site at Amarna, for example, around 85 percent were made from flax. Evidence of sheep and goats has been found in Egypt dating back to the Neolithic period, and they were certainly capable of using wool: forty-eight samples of it were also found at Amarna. Part of the answer may be quotidian. In Isis and Osiris, the Roman writer Plutarch praised linen’s cheapness and the feel of it against the skin. It is true that linen conducts heat extremely well, making it feel cool against the skin, which is why it is associated with summer months and warmer climates. It is also one of the strongest fibers, twice as strong as cotton and four times as strong as wool. It ages well, too, growing softer with wear and laundering.

Like most cloth, essentially the world’s first technology, linen has been huge in trade, building fortunes from its strong, luminescent fiber.

We’re far away from the pervasive uses of linen in ancient Egypt, from ubiquitous everyday clothing to all their household textiles to sacred religious garb, ornamentation, and shrouding. But linen has remained a key fabric in life the world over.

Here in America when the patriots were fighting the Revolutionary War against England, it was considered unseemly to dress in silks and the exquisite printed chintzes imported to the colonies from England and France.

General George Washington’s wife Martha, the very picture of wealth and influence, chose during the war to wear only American homespun linen produced by the enslaved population on their Mount Vernon estate. Yet still, when fellow colonists remarked on her garb they regarded such painstakingly produced linen as simple but elegant.

But then King Cotton came along, and linen began to be seen as kind of a crude fabric, suitable more for a workman’s uniform than for a plantation lady’s dress.

The truth is that linen is anything but!

Beautiful, glorious, luxurious, lovable linen — as royal and sacred as it ever was.

Today many luxury brands curry in linen fashions for the body and sumptuous sheets and pillowcases for the bed. I even reupholstered my 19th century Duncan Phyfe couch in a plain teal linen (against all advice, mind you, that it would look “too wrinkly.” It doesn’t!).

Typically for Lady Virginia Vintage I source hand- or screen-printed linens from the 1970s and earlier (and some from the 80s & 90s). Below is a gallery of some of my favorite vintage pieces from brands like Scalamandré, Brunschwig & Fils, Greeff Fabrics, David & Dash, Jofa, Stroheim and Romann, and more. Enjoy!

Please visit the shop to find a printed linen fabric for your decor. We deal exclusively in antique and vintage fabrics, so usually when a piece is sold we’re not able to get any more of that design. My advice? If you see one you love, best to grab it before it’s gone.

Be the First to Know

Learn about new finds, sales, customer stories and more. No spam ever.